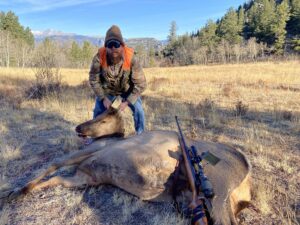 Believe it or not, people with all sorts of handicaps hunt. This includes the visually impaired. I remember years ago we had a special education student who was blind and his father wanted him to take the hunters’ safety class.

We thought he was crazy but apparently the man was not as crazy as we thought! Some states will license the visually impaired to hunt.

I was not able to find information for Pennsylvania but Iowa, Michigan and Texas all allow the visually impaired to hunt. Other states don’t have statutes against it.

How does this work? I mean really? I would not want to be down range of a blind person with a gun.

There are two types of age-related macular degeneration:

Within these two main types, the severity can vary greatly depending on various factors such as genetics, environment, and age.

Stargardt disease, also called Stargardt macular dystrophy or juvenile macular degeneration, is the most common inherited macular dystrophy for both adults and children and affects one in 8,000-10,000 individuals.3 Often times, vision loss slowly occurs during childhood or adolescence, but for some individuals, it may not occur until adulthood, such as in patients with fundus flavimaculatus.

Myopic macular degeneration (MMD), also known as pathological myopia or degenerative myopia, is closely associated with choroidal neovascularization (CNV), which is the leading cause of visual impairment in those younger than 50 in the US.4 In highly myopic, very nearsighted, eyes, the ocular tissues (retina and choroid) are gradually stretched as the eye elongates. In some individuals, this stretching may lead to structural damage.

Dry AMD is a slow deterioration of the cells of the macula, often over many years, as the retinal cells die off and are not renewed. The term ‘dry’ does not mean the person has dry eyes, just that the condition is not wet AMD. The progression of dry AMD varies, but people often carry on as normal for some time.

Founder and Chief Innovator at Digital FOV, LLC View all posts by DigitalFOV